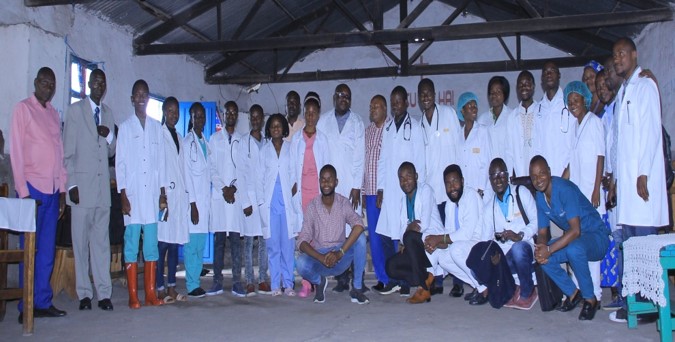 In collaboration with a local Association ESVECO, and Aide Medical Congo (AMC) the CMA “Christian Medical Association” delivered free consultation, investigation and treatment of Paludisme to the Population of Mugunga in Goma North Kivu from Thursday 17 to Saturday 19th October, 2019.

Seven hundred and thirty people were investigated and treated for malaria. The major focus of medical supply was on those suffering with malaria knowing that it is one of the diseases that has swept away a number of people living in MUGUNGA AND GREEN LAC.

DAY ONE OF THE CAMP

The medical camp began on Thursday 17th of october 2019

In Lac vert Quarter  goma commune, in North-kivu, in The Democratique Republic of congo, at 12h oclock, the work should have started around 8h:30 but due to unavoidable circumstances we beggan abit late, for the were some agreements by the ministry of health to provide some equipements unfortunately they delay and we could not manage the event without them.

It took us  thirty minutes  to kick off the event , all the patients were ready under a tent, outside the church requested by EVSCO where all doctors were awaiting for the official lunch.

With the crowd of expectants awaiting eagerly to be treated and consultad with their small ticket in hands on quee with arrival the medical aid congo the event beggan peacefully and in a calm mood where a team of students were welcoming people to wash their hands appropriately and onather team on distributions of tickets in order to follow the line, and at the entrence three more student,

As you enter the church there you meet two students using the paracheck for B.P measuring the blood pressure and in front of them  eight tables were aline and on each table one Doctor with one or two DOC 4 students assisting them while doing the consultation.s  for a temperature check

DAY TWO OF THE CAMP

Day one was not that easy first of all knowing

that it the fist medical camp done by A.M.C A,

around 2pm all volunteers doctors, students,

and ESVCO members took a lunch break of breads and Sodas availed by A.M.C.

to cover the whole  need of each  resident according to their expectations,

however  we were able to consult over  223 Two hundred and twenty three people ,

and we ended the consultation work  around 30 min 4pm.

one jeep was ready and started  taking volunteers back each at his her home stage,

and the last gathering left around 5 pm past to preparer for the next day.

As result of delay from day one day two beggan with energy and enthusiastism,

and determination  from all teams. around 8 oclock ,

Doctors,medical students as well as members of ESVECO all were ready preparing files,

arraning patients way on how to proceed with their consultation.

With a resilience spirit we received over  259 People

where 28 of them were tested positively on the TDR test.

and passionate with his her assigned work,

and at lunch time you could see every one excited from the great experience receiving.

Around three thirty we could not get any one

and the vast majority was prevented by the rain that drove

where they decided to stop for day 2.

DAY THREE OF THE CAMP

We eventually had our last day of consultation on Saturday,

this did not start as other days simply because it was very cold early morning after,

around the last team arrived around 9H,

the team that arrived early beggan their duty as residentents

were also given small ticket to line up.

As the day continue we could get the mood changing step by step ,

the more patients came in the quicker DOCTOR were proceeding with consultation,

on this final day we were able to consult 255 People on a positive TDR of  48 cases.

With the mobilisation of the people and the human resources

in place as well as  medical equipements  and drugs we managed

on our side given strengh and capacity treating unpreviledges onses

without discrimination, and negligence,

we appreciate the particpation of each DOCTOR,

in the hearts of  people living in mugunga and lac vert.

Some of the positive points,challenges and suggestions are stated

down in order to have an over view

on where to encourage and correct to the next event.

As we were collecting datas,

we came to  realise that out of 737 people